It is considered a basic principle of economics that people should be able to borrow so they can consume based on their “permanent income,” and that such consumption is the fuel for our economy. The middle classes do it to great effect. Poorer segments of society, however, cannot borrow in this way—without access to safe forms of small-sum credit.

Traditional Installment Loans (TILs) are popular across many socio-economic levels, but their benefits are most significant in areas where bank credit is unavailable and they can provide a safe and affordable source of credit for individuals and families to deal with emergencies or take advantage of opportunities such as sales tax holidays or back-to-school sales.

Installment loans are not difficult to understand. Indeed, many peoples’ understanding of credit is likely to be along the lines of an installment loan—a sum of money is borrowed and repaid with interest in installments until the debt is repaid. They are traditional form of borrowing that has been around for countless generations.

Understanding the structure and history of installment loans is important because, in the last 30 years or so, we have seen the rise of payday-type loans, which are generally repaid in a “balloon payment,” comprising the entirety of the principal, plus interest and fees, due in full, on a certain date.

This borrowing alternative has split the non-bank, small-dollar loan market. In recent years, many efforts by the government to regulate small-dollar loans have focused on managing the consequences for borrowers who cannot afford to make the balloon payment when it comes due and are forced to refinance the loan to avoid default. Some have come to call this the “debt-trap” or “cycle-of-debt.”

TILs are radically different from payday loans in the way they are structured, priced and regulated. These differences are what make TILs a smarter option for borrowers, offering them better rates and significantly higher levels of safety and affordability.

Payday loans are repaid in a single balloon payment at the end of the loan period. Because this single, lump sum payment is usually due in fewer than 30 days (though, frequently, the term is as short as 14 days), repayment can lead to significant problems for the borrower. In contrast, TILs are fully amortized and repaid in manageable monthly installments made up of both principal and interest.

Traditional installment lenders assess a borrower’s ability to repay a loan by calculating a monthly net income/expense budget to ensure the proposed installment payments can be met through the borrower’s monthly cash flow. Payday lenders, on the other hand, do not assess this ability to repay, relying instead on a postdated check or on similar access to a borrower’s bank account, as their assurance the loan will be repaid.

If a borrower cannot afford to repay a payday loan in full when it comes due, they are left with no option but to refinance that loan. This results in what observers call the “cycle of debt,” in which the entire balance of an initial loan is refinanced multiple times to the borrower’s detriment. TILs avoid a cycle of debt with regularly scheduled, manageable payments of principal and interest, giving the borrower a clear roadmap out of debt.

Traditional installment lenders report to credit bureaus, allowing borrowers to establish new creditworthiness or repair damaged credit. This, in turn, allows borrowers access to more credit options, often at even lower interest rates. Credit bureaus do not, however, accept data from payday loan companies. Consequently, the successful repayment of a payday loan offers no benefits to a borrower’s credit score.

TILs also differ from payday loans in that they refund unearned charges in the event a loan is repaid early. Payday loans do not.

A summary of the differences between TILs and Payday Loans can be seen here: 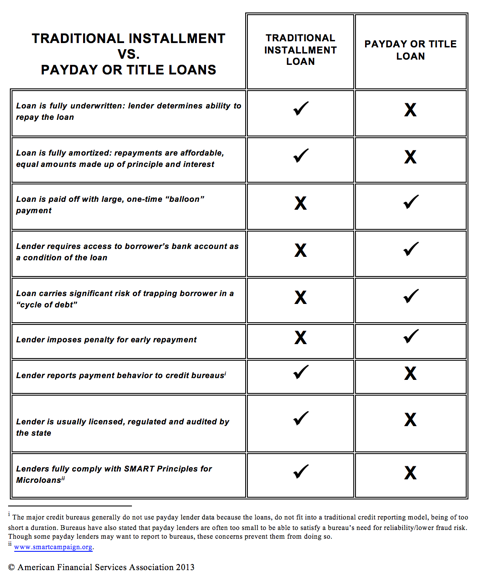