A Brief History of Consumer Finance

A Brief History of Consumer Finance

An individual’s ability to consume goods and services based on their lifetime income, rather than being limited to the income they have to hand and are free to spend, is an important underpinning of modern capitalist societies and it is the relatively new phenomenon of consumer credit that has enabled this. This post, drawing on Lendol Calder’s book Financing the American Dream: A Cultural History of Consumer Credit, among other sources (see endnote), briefly outlines how consumer finance developed from its 19th century origins and focuses particularly on installment lending; it is, after all, the long history of installment loans that qualifies them as “traditional”. 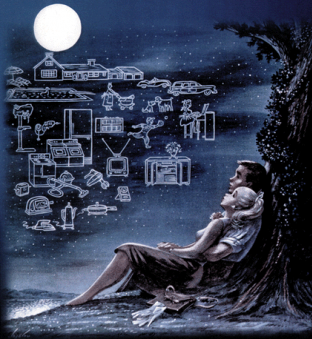 “Americans have always lived in debt”

“A river of red ink runs through American history,” wrote Lendol Calder, “Americans have always lived in debt. The Pilgrims came over on the installment plan.” English merchants financed the Pilgrim Fathers’ voyage to the New World in return for an agreement that the pilgrims work without profit for seven years upon arrival. In the 19th century, a differentiation was made between “productive” debt – loans to finance farms or businesses and “consumptive” debt –  frowned upon borrowing to satisfy personal appetites. Both of these forms were prevalent at the time – the scarcity of coinage in rural America meant many farm families lived in debt to local vendors and there are countless examples (Thomas Jefferson, for one) of individuals who borrowed simply to “keep up with the Joneses”.

The Rise of Installment Lending

The practice of Americans buying consumer goods on an installment plan dates back to the Civil War. Manufacturers realized that more people could afford to buy sewing machines and horse buggies if they bought now and paid later. Beginning in the 19th century, installment payment plans were made available by sellers for purchases of furniture and other domestic goods. By the early 20th century, American factories churned our more and cheaper products, like washing machines, refrigerators, phonographs and radios. Most of them could be bought on installment from the vendor or via a layaway plan.

Nevertheless, the nascent lending industry was still somewhat limited. Few financial institutions in the nineteenth and early twentieth centuries were willing to extend consumer credit. They simply did not have enough information to assess the creditworthiness of most individual borrowers, and the costs of managing such loans and the associated default rate would have been prohibitively high.

The arrival of the automobile ushered in this new age for consumer credit, with Henry Ford’s first Model-T rolling off the new-fangled production line in 1908. It was intended by Ford to be a “car for the great multitude” and cost $850 ($20,156 in current dollars). Unsurprising, the vast majority of Americans could not raise those kinds of funds. An average family would have to save for years to buy Ford’s “affordable” car.

It was General Motors rather than Ford which invented the auto loan credit system and subsequently been described as “at the forefront of modern consumer capitalism”. The socially conservative Henry Ford was not impressed. “Ford had older views about whether it was a good idea to use debt to finance cars,” Caldor says. “He was against it.”

While many Ford dealers offered their own payment schemes, the Ford Motor Company stuck to an old-fashioned layaway plan. “Ford asked people to bring in $5 to $10 a week and deposit it in an account run by their local dealer. And then when they had enough money in the account – only then could they take delivery,” Caldor says.

Meanwhile, another form of consumer credit had also been expanding in the first decades of the 20th century–“personal” loans. In earlier times, middle and working-class people who needed to borrow relatively small amounts of money got turned away by banks and other financial institutions. They relied instead on relatives, pawnshops, loan sharks or even petty-crime.

By the 1920s, new firms such as Household Finance Company and Beneficial Loan Company hoped to change this and make small loans ethically. Household Finance Corp. was founded in 1878 by Frank J. Mackey of Minneapolis, Minnesota. In 1895 it was the first financial company to offer installment loans, under which a consumer loan could be repaid through a regular monthly amount rather than a balloon payment – a lump sum repaid on the due date.

In 1929, the Wall Street Crash marked the beginning of the depression. 25 percent of Americans were out of work. Millions more saw their wages or hours substantially cut back. Installment loans were often the only safe and affordable option for individuals and families looking to meet their needs between paychecks.

Sources of consumer credit exploded in the years following World War II. In the 1950s and early 60s, charge cards like Diners Club and American Express became popular. In the late 1960s, a credit card revolution led to Visa, MasterCard and Discover.

Payday and title loans developed during the 1980s after a Supreme Court decision (see below) opened up certain states and jurisdictions for this kind of lending and payday loan offices began to appear. The rise of the internet facilitated a significant increase in the number of payday lenders eager to do business. As the socio-economic consequences of balloon-payment loans began to be felt, federal, state and even local governments began to look for ways to effectively regulate these new, non-traditional forms of credit.

Innovation in lending has always moved faster than government regulation, driven as it is, primarily by consumer demand. Deregulation in the early 1900s led to the Uniform Small Loan Law in 1916, which allowed specially-licensed lenders to charge higher interest rates—up to 36%—in return for adhering to strict standards of lending. [It should be noted that this is the origin of the 36 % APR cap favored by some policymakers in recent years, which NILA believes is a false measure of loan cost, and an inappropriate and damaging way to regulate consumer finance.]

Between 1945 and 1979, all states adopted special loan laws that capped interest at higher than the general usury rate—at 36%.

In response to what is seen by many as excesses in the Mortgage Lending industry many states and cities tried to protect their citizens by adopting state statutes and local ordinances to curb so-called predatory lending. In 2005, the federal government changed bankruptcy laws, making it harder for consumers to discharge their debts in bankruptcy.

In 2006 Congress passes the “Talent Amendment” which capped interest on loans made to active military personnel and their families at 36%. This began a decade of state-level efforts to impose similar caps in an effort to crack down on payday and title loans. Unfortunately, the vast majority of these efforts made no distinction between different types of small dollar loans and affected the availability of installment loans, increasing levels of hardship for needy borrowers and creating credit deserts in certain states and municipalities.

In 2010, in response to the failure of the Mortgage Backed Securities market and the consequent recession, the passage of the Dodd-Frank Wall Street Reform and Consumer Protection Act, created a Consumer Financial Protection Bureau with a mission to  “rein in lending excesses”.

In 2017, the CFPB issued its Final Rule on payday lending. This rule was widely seen as being effective in curbing balloon-payment-type payday loans while leaving room for safe and affordable installment loans. NILA’s sister-organization, the American Financial Services Association (AFSA) was quoted as being “…pleased to see that the bureau has made the important distinction between beneficial traditional installment lending, and payday and title lending”.

The development of the non-bank lending system in the US has been mirrored by efforts by government to regulate in a way that balances consumer protection with wide access to credit, which is seen as empowering individuals and families, and driving social and economic mobility.

There are, of course, no shortage of critics who believe that certain classes of borrower should not have access to credit. Some, on the other hand, recognize the growing “democratization” of credit, as middle and working-class Americans have gained access to financing that was once reserved for the privileged.

Some think that debt is why we continue to put in long hours at work even though we live in the wealthiest society in history. After the loan is secured, says Lendol Calder, “What follows is weeks, months, sometimes years of hard work to pay back the bills. That’s not hedonism to me. That looks like discipline.”